This is the same regurgitated article that has been circulating the media for the last three or four months regarding Mexicans crossing the border into the US, and then somehow buying the type of firearms that make ABC news pee in their Levi's. "Gun show loophole" my ass.

But I found a picture of the dreaded ".38 caliber 'Super Pistol" that Jerry Seper of the Washington Times was talking about: 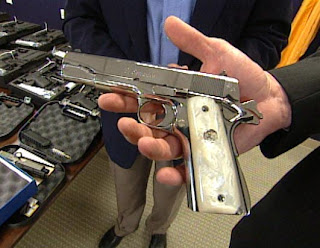 I've heard that this type of pistol can push that 38mm caliber round clean through a garbage truck; from front to back; in-one-end-and-out-the-other! Yeah, it's that powerful, that's why the Mexican Federali's call it el penetrator de camión de la basura!!

And you better hope they don't get ahold of one of these: 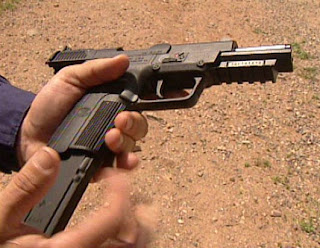 That thing fires a round that can penetrate the planet, that's why terrorist drug runners call it "el penetrator del día del juicio final de la tierra," not "mata policia" like ATF special agent in charge Bill Newel says. Apparently, the other news sources haven't found out that the same 'bullet' is chambered in the Walther P99!!

If they bought one of these .22 caliber pistols, called "el pequeño 0,22 que puede" by terrorist extremists, they can shoot through a standard ballistic vest and save a few thousand peso's: 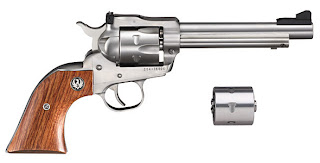 I just peed myself..

Update: Check out this video of an ATF agent shooting not only the "el penetrator del día del juicio final de la tierra," but a full-auto M60 general purpose machine gun that he uses to shoot up a car door. All humor aside, the M60 costs about $40,000, and you can't buy one at a gunshow without 6 months of paperwork. They are lying to the viewers.

The ATF agent, and also ABC news, would lead you to believe that the gun fires some amazing type of cartridge that can "penetrate light armor" just because it can shoot through a car door. It cannot penetrate light armor; that is a bald faced lie. It can, however, penetrate a car door like just about any other type of firearm. Whoopity-doo.

This is why the mainstream press pisses me off so much. Liars!

This is one of the most disingenuous articles I have ever read - http://abcnews.go.com/Blotter/Story?id=4695848&page=1. Not to mention that it’s the same trifling article regurgitated among other “news” agencies for the last four months.

You are tricking your viewers into believing that Mexicans are sneaking across the border, going to a gun show, and buying a $40,000 M60 - a Class III machinegun that even a qualifying American can only own after filling out months of paperwork with the ATF/rock that the lying ATF agent crawled out from under.

Wow, so a FN FiveSeveN pistol can pierce a Kevlar vest meant to stop anemic handgun rounds? So can the common .22 Magnum - http://fateoflegions.blogspot.com/2008/03/part-3-ballistic-vest-live-fire-test.html. So can a knife too, by the way.

How about doing some actual research for once; instead of relying on some ATF fraud who agrees with your bias opinion that every firearm is evil because you heard it can shoot down satellites.

“Assault weapons made in China and Eastern Europe, resembling the AK-47, have become widely and cheaply available in the U.S. since Congress and the Bush administration refused to extend a ban on such weapons in 2004.”

Take this quote from your article for example. These “assault weapons...resembling the AK-47” were available before, during and after the “ban,” which didn’t ban them at all. A quick Google search would have brought that to you attention, but don’t let the facts get in your way, because it does sound frightening to keep calling everything an “assault weapon,” despite the fact that it is not so.

Keep up the work, lest I run out of material to mock on my blog.

I'm waiting with baited breath for a response...

Update: Confederate Yankee has lots more; H/T to Says Uncle. It seems ABC news has been caught in a perpetual lie about this issue before.

Thanks so much for sending us your contribution. We read everything we get from our users, and will pass on this information to our reporters and editors. We hope you'll continue to send along facts and information. Thanks again --The Team at ABCNEWS.com

Sure thing, Team! The question I have is: what will you do with the facts and information given to you?

Your rite. Im drunk and white n hate the mexicans