This week's post is on the movie Shooter, staring Mark Wahlberg, who plays the character Bob Swagger. I have not had the pleasure of reading the book "Point of Impact" by Steven Hunter, of which the movie is based on. I have heard that the book is better.

The movie is about a Marine Corps sniper who is set up by some shady contractors as the shooter in the assassination of the Ethiopian archbishop. There are some really cool weapons in this movie, and I decided to post some of them for your viewing pleasure.

The first guns shown in the movie is the USMC M40M3 in what would be 7.62x51mm NATO, wearing a Unertl 10x power scope. 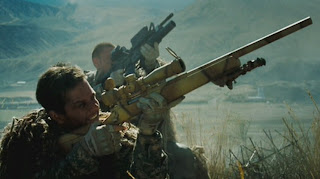 In the background you can see the spotter with an M4 with mounted M203 grenade launcher with an Aimpoint CompM4.

I'm not sure who's bright idea it was to put two alleged Marines in U.S. Army ACU's (Army Combat Uniform), nor do I know whom it offends more; Army Soldiers or Marines.

I do believe that the reason the spotter is carrying an M4 instead of an M14, or at least an M16, considering they are snipers, is because they are also toting a Barrett M107 chambered in .50 BMG which is wearing Nightforce optics. 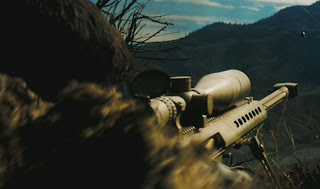 There are two interesting things about the scene where they are under attack from the gunship. First is that the snipers both engage the gunship with their rifles until the spotter gets killed, at which point Swagger picks up the Barrett. Why not use the Barrett first?

The second thing is that Swagger hand cycles the action of the Barrett for every shot. I would think that the reason is because that blanks probably do not have the oomph to cycle the bolt. You can clearly see the case stuck in the breech before he racks the round home.

Next up we have a beautiful Cheytac M200 Intervention chambered in .408 Cheytac with a Leupold Mark 4 ER/T M1.

Of note is that the minute marks on the optic are spray painted with the rest of the rifle, as are all of the other minute marks throughout the movie. I don't believe this to be SOP, but if there are any real shooters out there who are in-the-know, please leave me a comment.

Just a couple of feet from the muzzle in this picture is a large dog that would surely be deaf from the blast, if real cartridges were being fired.

Up next is an unknown type of .22 caliber rifle with a homemade suppressor. Once again, if anyone knows what type of rifle this is from the profile, I would love to know.

I found this to be pretty cool. Swagger and an FBI agent are making pipe bombs, and he is using IMR-4350 to fill them. 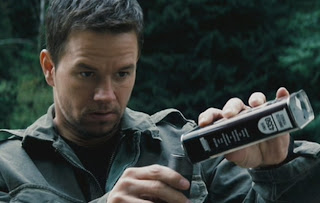 The next gun that I captured from the film is in the hands of this...operator? I hate that word. 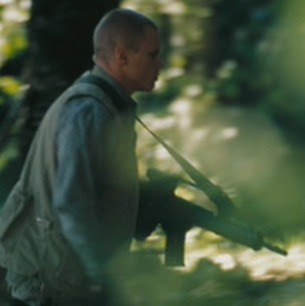 It is an H&K G36, which as we all know makes him a super pimp, bad ass! Because...like...it's an H&K, and it like totally rocks, and everyone that wields one is a stone cold, super ninja!

Is it me, or is it getting all tactical up in this piece?

Too bad this guy becomes fixed blade fodder shortly after this frame by falling victim to Swagger's knife, which is also interesting because the guy dies almost immediately after being stabbed in the kidney. Ahh, realism.

On to the next! What we have here is Swagger shooting an M4 with an Aimpoint CompM4.

Right before this frame, Swagger is running with this M4 and decides to change magazines. It appears that he drops the magazine, re-seats it, and then racks the charging handle, at which point you can see a cartridge fly from the ejection port. Ooops.


He is also firing on auto when you can see that the selector is on semi-auto. I know, it's a movie and all, but I have an eye for these things.
Also, check out that muzzle flash! That is definitely not an A2 flash hider. I have heard that blanks make lots of flash so that the viewers can tell when the weapon is being fired.
The rifle on the ground to the left and the rifle on Swaggers back are both Remington Model 700's chambered in .300 Winchester Magnum; a cartridge I love to shoot.

Here's a close up.

Notice anything unusual about the brass being ejected? It's definitely a blank. Also, you can see the spray painted Leupold with the covered minute marks. Strange.


Another gun that came up towards the end of the movie is this gaudy Beretta 92F with chrome plating and pearl grips. 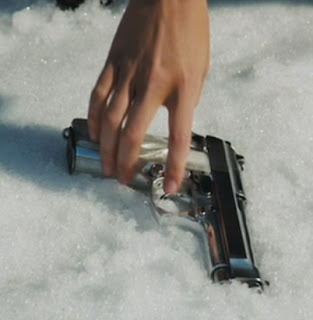 The gun has four rounds in it when it is used to gun down a bad guy who is played by Elias Koteas, who I have a hard time seeing as a strong character since I still picture him as Casey Jones from the movie Teenage Mutant Ninja Turtles.
He does well as a bad guy, mind you.

The last gun I have for you is an M1911A1 of some undetermined make. This gun is used to destroy the last of the bad guys, and is the last weapon used in the movie. Other than that, there is nothing special about it considering that you can't get a good look at it. 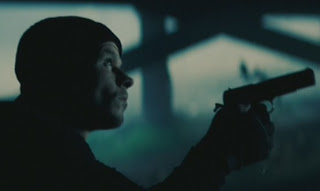 That's all I've got. I'll have more next week!
Posted by Unknown

I'm enjoying these greatly. Keep it up!

That nickel gun with the pearl grips is a Taurus PT92 not a 92FS, note the frame mounted safety. A beretta has a decocking safety.

Hi, i noticed one thing at the beginning of the film (sorry for my English) :
The snipers are engaging the ennemies with a sniper rifle but, when the helicopter arrives, they stand up and the guy with M203 launches a grenade despite the targets are about 700 meters further (he tells the range a little earlier)... without aiming and blows up one of the trucks... lucky !

I mean, his M203 is very very enhanced to shoot at 700m, and the guy is the best shooter ever to hit a car without aiming just a little!

This movies is full action, and the guns showed in this film are so incredible specially the USMC M40M3, the mission in this movie its made to cause a total destruction in a area so huge, in main paper there a old guns user Mark Wahlberg with this is confirmed, if you wanna see some movie and stay in house this weekend definitely you must see this movie.

I've got to say that despite the probability that a trained "Operator" (I also despise the term) would die instantly from a stab to the kidney it is likley. Truth is you've only got to be stabbed 5/8" in order to die simply from the shock. The more vital the area, the more shock, the better chance of kicking the bucket.

Just also to confirm The guy holding the G36 to my eyes that looks like G36K, the G36 is the military version with twin optics longer barrel and bipod on the fore grip.

most of the time books are better than the film adaptation because books have to describe with more details the situation and there are part that it doesn't fit in a movie.

The rifle he use on the boat to protect the actor Michael Pena is a Cooey Model 600 with a homemade silencer. I hope this is the answer you were looking for the unknown rifle.
Best regards

i can confirm peter on the cooey 600. i have one in the cabinet very accurate inexpensive canadian made rifle.

The scope on the cheytac is a nightforce not a leupold. Check the turrets and magnification ring.