Shouldn't that be illegal?

Guns in schools I mean. There should be...like, a law or something, and maybe some signs so stuff like this will never happen.
Then nobody would dare bring a gun to a school; which is great, because the school staff is unarmed and totally helpless to stop an attack if anybody: a)went to the courthouse and read the law, b) made it past the signs and then c)decided to take a gun into the school anyways.
Glad we got that cleared up.
Apparently, even young criminals don't obey the law these days:

Three guns, at least one of which was stolen, and other weapons were found in a student's locker, police said.

The incident is believed to be gang related and likely related to friction between students that began at the end of last week, police said.

Gang related? They must not have read the law. It clearly states that guns are not allowed into schools. And how did they not see this: 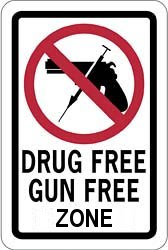 Why, it's almost like those little bastards have no respect for the law. We should make it more illegal so this definitely will not happen again, and maybe just do away with teachers altogether so there's no chance they will ever bring a gun to school!