I'm not sure what to think about Russia.
Good way to start a blog post, right?


So, on one hand you have an ego-maniac in power of a former Soviet republic that seemingly wants to grab as much land and power as possible with no repercussions. You've got to stop him, right?

On the other hand, you have an American electorate that is tired of fighting wars in places across the world that they have no desire to be in. I'd love hear how many Americans can deliver the capital of Ukraine when asked. (You knew it was Kiev but you're smarter than most Americans). 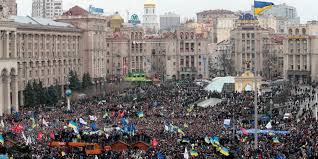 With Russia being left largely unchecked, Ukraine is freaking out.

"The aim of Putin is not Crimea but all of Ukraine... His troops massed at the border are ready to attack at any moment," Ukraine's National Security and Defense Council chief Andriy Parubiy told a mass unity rally in Kiev.

You know what, I would be freaking out too if I were in their shoes. Is it Team America's job to keep them protected? They're not in NATO (at least not yet) and I'm not really sure where our allegiances lie when it comes to protecting some of those eastern most allies. (Poland, I'm looking at you).

Warning: Probably not safe for work (some profanity):


So, help me out here. Should I be afraid enough of Russia that we need to squash any signs of their aggression at the absolute moment they start? Or, is it time we focus on getting our own house in order and leave Russia to do what it wants with its former soviet republics?

Personally, I worry there is a slippery slope if you get into the business of ensuring actual and not just figurative democracy across the world. What I mean by that is that in places like Ukraine, there has been an election. But there are also elections in nations where the results are riddled with fraud. Should we have to police all of these nations to ensure that their "democracy" is a "fair" democracy?
Posted by Unknown No comments:

I'm already out of billion dollar perfect bracket challenge. To be honest, I'm not feeling the whole NCAA basketball tournament as much as I have in past years. But, I suppose it's still good, clean fun, right?

To keep it interesting --- here are my Final Four:

'Cuse wins it all.

Who do you have?

I just wrote a piece for the folks over at Blog Brigade/Military OneSource.

I hope it gets picked up, we'll see!

Feels good to be writing again! More to follow!