I'm going to start posting movie guns weekly if I can. I watch lots of movies and I'm a critic when it comes down to accuracy. This week is mainly about the 1911, but since I was taking pictures from movies I decided to add a few more.

The first movie I went through was We Were Soldiers staring Mel Gibson. There were plenty of other great actors in it, one of which is Sam Elliot who wields a Colt M1911A1: 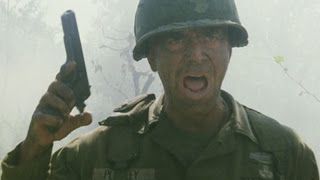 I can usually pick out an actor who has had little gun handling skills in life, and I think Sam Elliot is one of them. Cocking a 1911 with your finger inside of the trigger guard is a big no-no. Also, as he's fighting with the pistol you can see that he's not really even aiming at the NVA soldiers that he "kills," he sometimes fires towards the ground.

The 1911 can be seen elsewhere in the movie, such as this "Hollywood High Ready" picture that is so common in film: 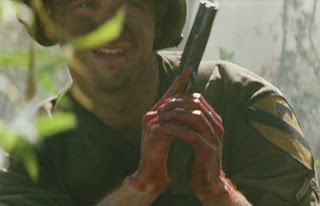 This hold serves no purpose whatsoever but is seen on just about every movie poster ever made. He does however keep his finger straight and off the trigger which Hollywood does not usually enforce, and he doesn't do the "cup-and-saucer" pistol hold that is also very common amongst the firearm uneducated, so I would say that this actor has handled a firearm before.

Next up we have the movie Major Payne. Damon Wayans fires his 1911 into the air to get his ROTC students under control: 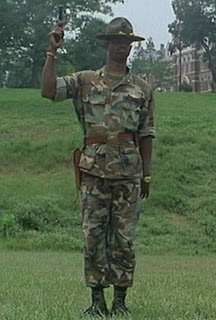 I have no idea what the make of this pistol is.

There's not a whole lot to say about this movie. He is seen with the gun at the beginning of the movie but I can't recall him ever firing it until this scene

The last film I'm going to cover is Black Hawk Down. The two Delta Soldiers had Colt M1911A1's and used them in a big shootout in the middle of the movie: 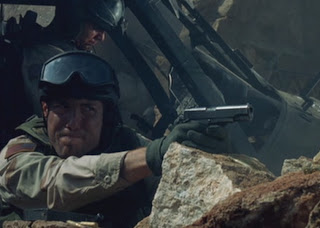 Both eyes open and looking for a target, but every time he fires his eyes are closed. You see all kinds of poor shooting when you advance the film one frame at a time. 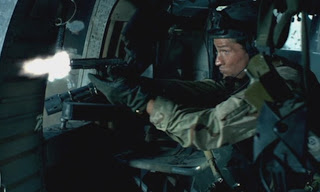 Here is a picture of the other guy firing his 1911. If you look closely, you can see the pistol's hammer is back but the gun appears to be firing. The muzzle flash was added after the scene was shot as there are many more places where you can see the pistol is at slide lock but he keeps firing anyhow.


You can only tell these things if your going frame by frame, when the film is running normally everything looks fine. The shootout looks really good at full speed.


For fun I threw in some extra guns from the film. A M14 with an Aimpoint on top looks cool, and I'm sure it's devastating in an urban environment if you don't have to clear rooms or tight spaces, but I would imagine that the rifles long range effectiveness is ruined. Just a thought.

Here is a Colt M4A2 with a fake suppressor attached. The rifle looks great with that Aimpoint on the carry handle but I'm not sure if that's a Surefire G2 Nitrolon mounted on the side. If it is, I doubt it existed back then. Also notice that he's not looking through the Aimpoint or the sight. I would say he has never fired a rifle before.

The last picture I have for you is the Heckler & Koch MP5 submachine gun that the injured pilot is fighting with. In his lap is a Colt M4A1 that belongs to the Delta Soldier above. The Soldier with the M14 gives it to the Pilot, but the funny part is that he isn't given the gun until about 10 seconds after this picture. I guess it is a movie mistake. 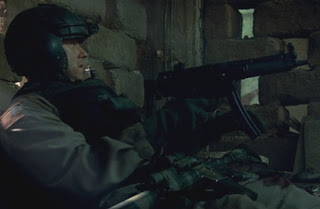 Also of note is the light on the M4 is taped to the forearm.


That's all I've got today. Enjoy.
Posted by Unknown

It's funny how you notice all the crap Hollywood does wrong once you have some basic firearms knowledge and experience.

But, speaking in context of it being a movie, an M4 or M4A1 was actually used in two shots in this movie: The first being the Mess scene at the base camp when Hoot is reprimanded for not having his weapon on safe and the second in a scene at the beginning of the battle just before Deltas blow open a door and enter a room full of militia leaders.

To the person who commented above me:

According to the book Black Hawk Down (which was written with references from the survivors), it doesn't mention an M733. It does however mention the CAR-15.