We must ban it for the children

Beer pong, that is. And by children, we mean those who are potentially graduating from college.

According to police reports, she had three beers during the day, then played beer pong — a drinking game — in the evening, and downed some vodka, too.

Foellmi's death was tragic, but typical in many ways.

Yes, drinking yourself to death is typical behaviour. This is almost as bad as the crack epidemic with all of the children dying left and right:

An Associated Press analysis of federal records found that 157 college-age people, 18 to 23, drank themselves to death from 1999 through 2005, the most recent year for which figures are available.

Wait a minute? 157 deaths in 6 years? Using the CDC's handy WISQARS tool shows that more "children" ages 18 - 23 die from Meningococcal Infection, and almost as many die from Meningitis; all during the same time frame. Maybe someone should put up a sign! 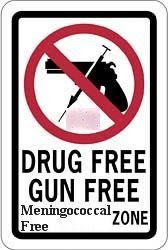 I mean, it works so well to keep guns and drugs off campus. Here's another deadly danger:

One practice — drinking 21 shots on a 21st birthday — has proven especially lethal.

Perhaps we should lower the drinking age to 18 to limit the number of shots consumed!
I need to be a politician.
Posted by Unknown