..of the same old garbage, this time from KAIT in Jonesboro, AR. Will Carter reports what everyone else has already covered over a month ago with the same tired points. Here is my past coverage.

Regardless of what these journalists say, nobody is trying to sell guns to children. Parents may be buying guns for their children to learn how to handle a firearm, but that is their buisiness, and it is certainly a far cry from this trash.

Why is it a bad thing to have a gun in a color other than black? If I let my kids shoot my black DPMS AP4 is that less dangerous than if I let them shoot a purple one? Parenting and education in regards to gun safety make kids safe, silly laws constructed by some ignorant politician will not.

Here is the meat and potatoes of the hysterics:

"You can look at these guns here, and this one for instance. It's a functional B-B gun that looks just like a Walther 9 millimeter. Put yourself in an officer's position. He has a split second to decide whether this is real or not," said DARE Officer Kevin Foust of the Jonesboro Police Department.

So nothing has changed in the last 50 years or so; police work is tough and dangerous. So tell me what good is this law then? Until then many toy guns looked really real. Now they make it seem like every gangbanger has a painted gun, so what would stop them from painting the orange muzzle of a toy gun to make it look real, or painting the muzzle of a real gun orange to make it look like a toy? This is not a new topic, but it has never been an issue and I doubt it ever will be.
Now we go to the gooey center:

Both police and those who sell guns say the problem lies with the toy guns. While they do have an orange tip on the end that is supposed to signify that they are not real, they also look a lot like the real guns, and have some of the same features.
"It's going to be hard to distinguish if this is a paintball gun or if this is a 9 millimeter," said Foust as he looked at paintball gun.

And making things more difficult is an array of new colors. Pink has become hot in the last two years, making it even more complicated to tell what's a toy and what's not.

Like I said, it's not like this is something new. Historically, toy guns have always looked real: 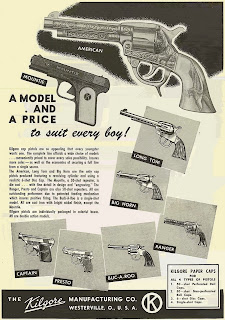 Yes, occasionally some kid gets killed by a cop who thinks the toy gun is real. I'm sure thousands of years ago some kid with a stick was killed when a Roman Centurian mistook it for a real spear. It's tragic but it's reality, and it's rare.

Women want guns in pink, purple, and whatever other colors that match their latest outfits. Hunters want camouflage, olive drab, and flat dark earth. Kids don't buy guns, adults do. Why can't they have it in the color they want. You can buy a Tazer in designer colors, are cops gonna start blasting people who carry a clunky piece of plastic? What about race guns? All of those accessories and colors could be misconstrued. What is the solution, banning spray paint? How about soap? I mean this is just another way to paint guns in a bad light, pardon my pun.

At least there is some realist dialog in this piece:

"If you are going to have guns around your kids, play or real guns, then you need to explain to them right then and there that once you pull the trigger on a real gun it's over," said Payne.

And there you have it.
Posted by Unknown