Remember that beautifully sculpted chunk of anodized aluminum that I picked up almost a year ago to the day? The one that I had to fill out a background check for because it's such a dangerous piece of metal?

Well she's all grown up now, and guess what? She has daddy issues. 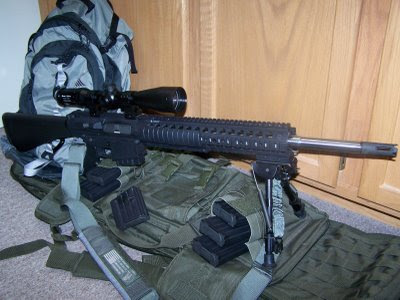 This qualifies as my BAG day gun.

I never anticipated how this project would come together under such dire circumstances. Originally, I was going to take more time to buy the parts that I needed and spend about another year putting it together, but with the gun buying madness that happened, and will continue well into the future, I had to amp up my parts acquisition to make sure I got it done. Even with that, many of the parts on this rifle were limited to what I could find, as almost everyone is out of stock.

I literally ordered this thing piece by oh-so-sweet piece. The upper and lower are the DPMS LR-308. The stock and lower parts were bought from everywhere and assembled as I got them over the last year. The trigger is a Jard single stage 2# which was the ONLY trigger that I could find after searching for about two months. I bought the bolt and Titan 20" barrel from Fulton Armory at the beginning of December, and I had to sell a rifle to have the funds necessary to get them. I was going to buy a Noveske 21", but they were out of stock on every barrel just like everyone else, and that pushed my decision to ramp everything up.

Most of the upper parts were picked up at gunshows, with some of them being bought online. Last week I went to buy a PRI Gen III tube, but found out that they were sold out everywhere. I remembered that Troy Industries had said awhile ago that they were coming out with a railed tube for the LR-308 uppers which require a new size barrel nut, and after a quick call I had one on the way which arrived last night. I had already ordered a gas block with 1913 rail that would have worked out perfectly with the PRI upper, but the Troy tube is 13.5 " long which made me have to order a PRI low profile gas block.

For a scope I went with a Horus Vision Hawk 3-12x50mm with the HH-425 hunting reticule. This was by far the most careful and well thought out buy of this whole deal. I wanted a scope that would get me to 800-1,000 yards with the .308 Winchester, but I didn't have the money to for a Nightforce, US Optics, or other such high end scope. There aren't many mid range quality scopes out there, and I found that I would spend more buying a decent $350 scope because I would also have to buy a $150 20 MOA base, plus rings and shipping. Overall I just wanted a very rugged scope with decent glass that would give me the range, and the HV scope does that. The one piece tube feels tough, the glass is clear all the way out to the edges, and the reticule is perfect for hunting. The manual says it will get me to 830 yards with 175 grain Sierra Match Kings without touching the knobs, and every forum I have read says that the HV reticule is fast for transitioning from multiple targets. . . . .like helpless groundhogs. The rings are the Burris XTreme Tactical extra-high, and they are the perfect height.

Now all that's left to do is shoot the beast.

The night before last I was resizing .308 brass when I broke the de-capping pin on my die. When I pulled the die apart to drop in a new pin, I noticed that the neck sizer was bent. I immediately ordered a new die set from MidwayUSA, and it should be at my door by Saturday, or Friday if I'm lucky. Until then I cannot shoot it because I am not going to pay $45 at Gander Mountain for a 20 round box of shitty ammo. Seriously, that place has the absolute highest prices on everything except powder. A month ago I payed a horrible price for two boxes of 155 grain Nosler Custom Competition bullets, and every bag of brass that they sell is twice the going price everywhere else.

Hopefully I will get into load development this weekend, and I'll post a range report when I get to shoot this thing.

That is a great looking gun.

You get a lot of satisfaction from rolling your own! Nice job.

I have been reloading since 1984, bought a Dillion 550 and never looked back. I also buy mostly Dillion dies as well. They have great customer service and anything and I mean anything that breaks is replaced free with a simple phone call. You don't even pay shipping.

Thanks for stopping by!

I have put a few rouds through it, and I still have some work to do before I can get up a range report.